​4. To relate the above to the original PROJECT BRIEF

NEWS STORY OF THE WEEK
http://newsstoryoftheweekblog.tumblr.com
INTRODUCTION -  EXAMPLES OF JOURNALISM FROM THE GUARDIAN
Reporting and opinion
This sort of writing is similar to a critical research report or dissertation.

Personal column writing
This is a subjective, personal style of writing.

Photo journalism
This is similar to a PowerPoint presentation.
1. REPORTING (AND CSR?)
Anti Islamic fashion 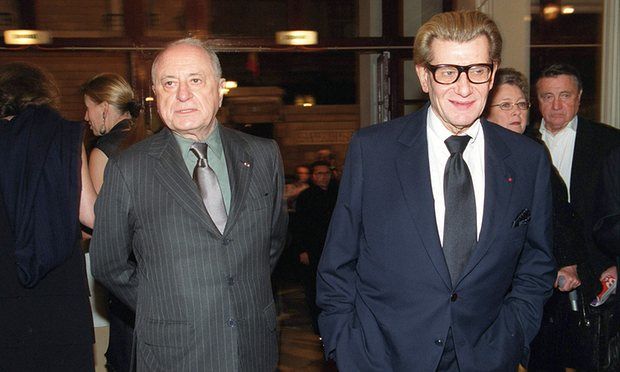 'Former fashion mogul Pierre Bergé has lashed out at designers who create Islamic clothing and headscarves, accusing them of taking part in the “enslavement of women”.

The French businessman was for many years the life and business partner of designer Yves Saint Laurent, who died in 2008. Together they founded YSL.

Bergé took aim at the big fashion chains that have followed the Italian designers Dolce & Gabbana in catering specifically to the Muslim market.

“I am scandalised,” the 85-year-old told French radio station Europe 1 on Wednesday.

“Creators should have nothing to do with Islamic fashion. Designers are there to make women more beautiful, to give them their freedom, not to collaborate with this dictatorship which imposes this abominable thing by which we hide women and make them live a hidden life.

“These creators who are taking part in the enslavement of women should ask themselves some questions.”

He declared: “Renounce the money and have some principles.”

Earlier this year Dolce & Gabbana became the first major western brand to openly aim at capturing a corner of the Islamic fashion market – estimated to be worth $260bn (£180bn) – with its abaya range. It included 14 abayas or ankle-length dresses, which it matched with embroidered headscarves and hijabs.

The Swedish giant H&M followed their lead, using a veiled Muslim woman in its advertising campaign, with the Japanese brand Uniqlo earlier this month announcing it would begin selling hijabs in its London stores. 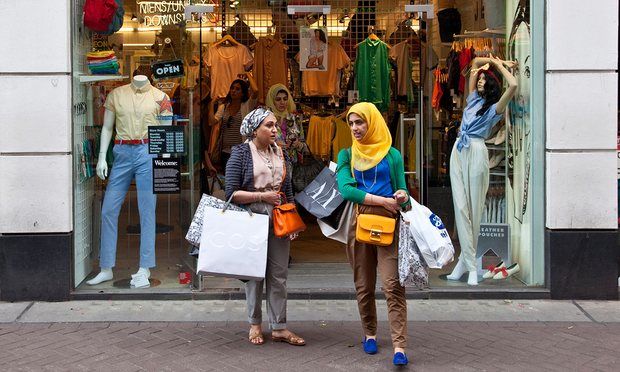 'Global brands are waking up to the massive opportunities of the worldwide Muslim market but many still misunderstand or ignore the potential of a burgeoning sector that is young, highly educated and collectively has enormous spending power....

Janmohamed said Muslim consumers broadly fell into two groups: futurists and traditionalists. Futurists combined faith and modernity. “They’re proud to express their Muslim identity, but are also brand-conscious and brand-loyal. They are open to the world, very tech-savvy and very engaged in social media.” Futurists – also described as “Generation M” – were younger and had influence disproportionate to their numbers, she added.

​Navid Akhtar, chief executive of the Islamic television production company Alchemiya, sketched out a similar group, which he dubbed global urban Muslims, or “gummies”. They were “hyperdiverse, spiritual rather than Religious-with-a-capital-R, educated, transnational – their family may be originally from Pakistan but now could be scattered across Canada, South Africa and the UK – they have a high disposable income, and the vast majority are English speakers.”
A key subset of gummies was “mipsters” - Muslim hipsters, aged between 16 and 24, whose hallmarks were identity, image, fashion, friendship and education, he added.' (Sherwood, 2016). 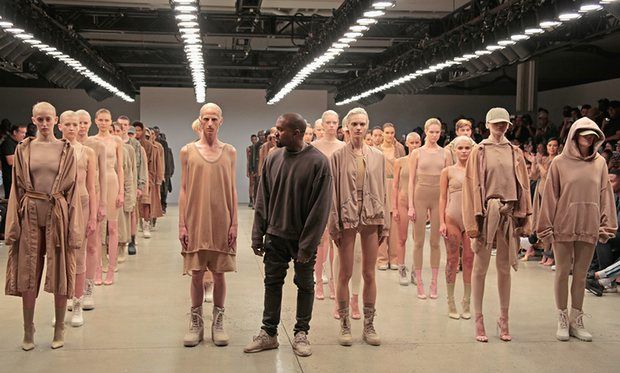 ' "I have heard that 'street style' is now the ultimate fashion trend. But what does that actually mean?"
Tamsin, by email

Excellent question, Tamsin! Yes, it has been a mighty changing of the guard at Chateau Fashion, with chic now officially out and dressing like you just fled from a burning-down JD Sports in...

I admit, I worried when Kanye announced he was branching out into fashion. “Pourquoi, Kanye, pourquoi?” I cried. The path is littered with the corpses of music people who thought they could do fashion because they, like, really love clothes, yeah? For every Victoria Beckham, Gwen Stefani and Puff Daddy/Diddy/Whatever, there are a million Chris Kirkpatricks, Lily Allens and Pete Wentzes.

Moreover, the timing somewhat concerned me. As happy as I am for West’s marital contentment, I’ll be honest: I wasn’t entirely certain whether marrying into a family so narcissistic they take selfies while driving one another to prison would be so good for West’s already fragile sense of reality. And, frankly, judging from his recent Twitter output I don’t think I was so wrong in my concerns. But about his fashion, it seems I was about as off the mark as the rest of West’s boring critics.

Oh, make no mistake, the Yeezy line is utterly absurd. West is, for some reason, very taken with flesh-coloured Lycra and camel toe (those two things are not unrelated), which I don’t understand and you don’t understand and we don’t need to. What is worth examining, though, has been his endorsement of what I can only describe as “dystopian sportswear”: baggy tracksuit trousers, jumpers with holes in them, sweatshirts with frayed hems. In short, sports clothes that look as if they’ve been in a fire. How I groaned when I first saw this hot mess – only for that hot mess now to be the only look that matters in fashion...

And actually, I think this is right. I shouldn’t get every fashion trend – I’m a 37-year-old woman, whose idea of good night involves my sofa and re-runs of Parks and Recreation. Frankly, I’d be worried about fashion if I was on its bleeding cutting edge.

So, no, I don’t get it and I’m not even going to try to explain it. But my main takeaway is how pleased I am that my man West has, once again, proven himself to be on the money. And even if I actually preferred how Kim Kardashian used to dress before her husband started putting her in horrible, weird clothes, the real point here is that West was right and everyone else, including me, was wrong. In your FACE, me!' (Freeman, 2016). 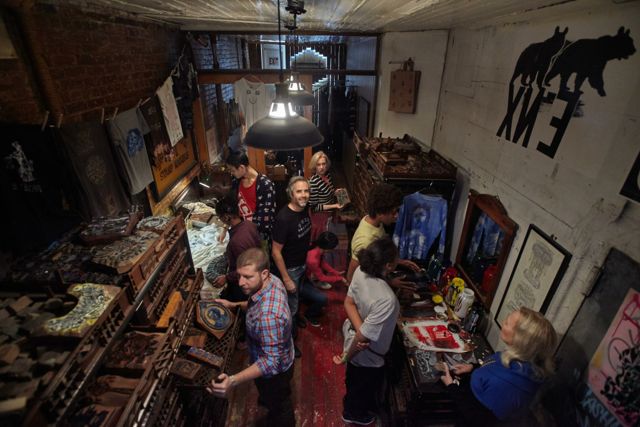 'New York is a city where everything has a price tag – except at the Inutilious Retailer. The new boutique is the invention of photographer Adrian Wilson, who brings shoppers together to create one-of-a-kind art that costs nothing more than their time...

Wilson doesn't keep regular opening hours: a sign on the door reads May Be Open or Could Be Closed. The only things on display inside this white space, lit by a giant barcode and and displaying a slot machine from 1929, are items of clothing made by previous guests. If a customer likes something, a recorded voice asks them to pull the slot machine's lever to try and get it. A mirror on the wall above rotates and they are invited into the back of the shop, which is behind a fake wall.

Inside the workshop, guests are shown 1,000 19th-century fabric stamps that Wilson collected from warehouses in his hometown, Manchester.

Guests are then invited to select a new piece of clothing, sourced from the Salvation Army, to make a print on, creating a new and unique garment. They leave this behind as payment for their chosen item.

The shoppers are photographed with both their new creation and the item of clothing they want to take home with them. They are emailed a photo of the person who made their garment and, later, get to find out who chose what they made, creating a chain of previously unconnected people. 'It's like an indoor Burning Man/Occupy Wall Street," says Miller.' (​'Welcome to the New York store with nothing to sell – in pictures',
2016).

5. SEE ALSO DRAPERS
The original PROJECT BRIEF asks you to base your writing on Drapers

Create a professionally presented research folder containing all your sources of information about the global fashion and textile manufacturing industry. This can be in the form of relevant fashion journal articles, newspaper coverage and internet down loads but there must be clear written evidence and highlighting on each piece which shows your thought processes, ideas and how you may want to use them in your report...

Present your annotated research in a professional folder.

Write a feature for the trade journal Drapers investigating particular issues involved in the changing face of international fashion and textile manufacturing relating to key environmental and ethical issues.
This is a journal report, so layout, visual interest and written style is also important. It is aimed at readers who are fashion industry professionals so make sure that your tone is informative and appropriate - minimum 1500 words

A journal report of at least 1500 words supported by images.
This is a magazine report, so layout, visual interest and written style is also important. It is aimed at readers who are fashion industry professionals so make sure that your tone is informative and appropriate.

Create a PowerPoint presentation covering key environmental and ethical challenges that the fashion and textiles manufacturing industry are facing in today’s society: imagine you are presenting at a fashion summit conference to an informed audience of fashion industry professionals. Support your presentation with word processed notes.


A PowerPoint presentation supported by written notes. Imagine you are presenting at a fashion summit conference to an informed audience of fashion industry professionals. 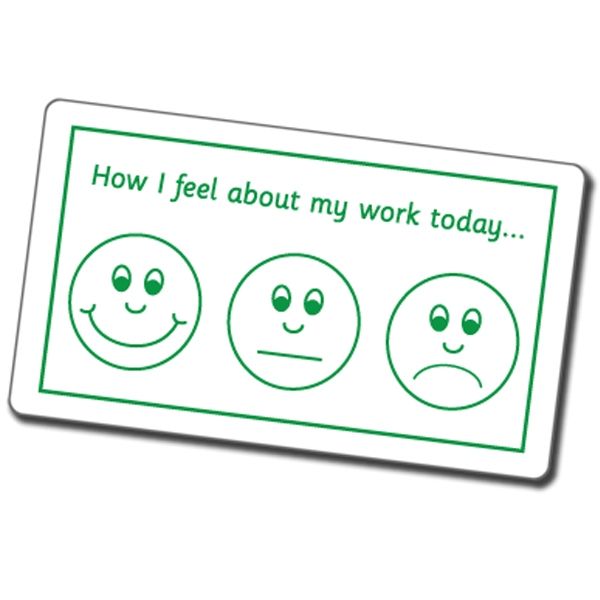 The  GLOBAL FASHION AND TEXTILE MANUFACTURING REPORT will be assessed on:

'Welcome to the New York store with nothing to sell – in pictures' (2016) The Guardian 8 April [Online]. Available at: http://www.theguardian.com/artanddesign/ng-interactive/2016/apr/08/new-york-store-nothing-to-sell-in-pictures-the-inutilius-retailer-adrian-miller (Accessed 10 April 2016).